Since the beginning I’ve wanted an effect that would follow an item as it moved along the belts. This week I made that happen! 🥳

It’s actually quite simple how it works. When you tap an item on a belt the camera will “attach” to that item and follow it until it goes into a building and is removed from the game. That “attach” behavior is just a function called every frame that re-positions the camera to where the item is.

This week I also made a couple of improvements to the asset automation scripts in my last post. Even with the very few models currently in game it was painfully obvious that running the scripts on every model each time wasn’t ideal. When working on a single model I wanted to export and convert only that one.

To support this I modified the script to support optional input arguments. So by passing the path(s) of assets to the script it will only convert those. If no arguments are passed in it will convert all assets like before, e.g. $ scripts/convert-game-assets.py assets/models/copper_ore.blend

While continuing work on the scripts I added the ability to render thumbnails of each model so they can be used in the UI.

It wasn’t easy to find anything online that did exactly what I wanted so had to figure this out by reading the API. Earlier examples from pre-2.8 didn’t always work since the API changed a bit. In case any readers are Blender Python API experts here’s what I did to get a simple render of the model. Please let me know if there is a better way :)

As you can see some of them aren’t perfect, but for now that’ll do just fine. 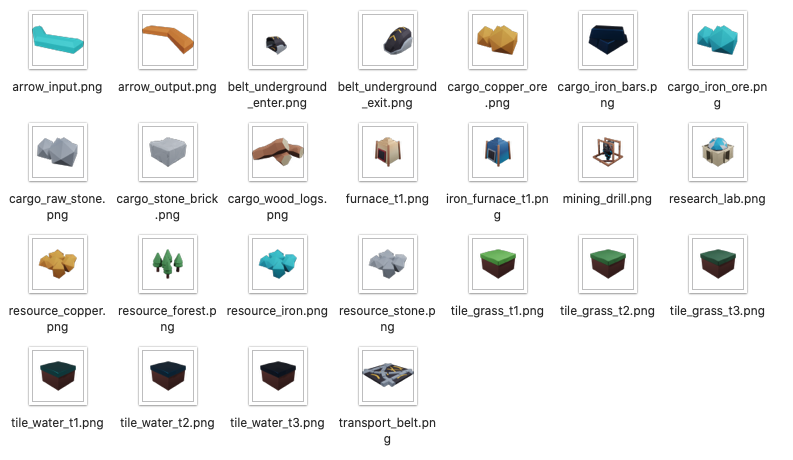